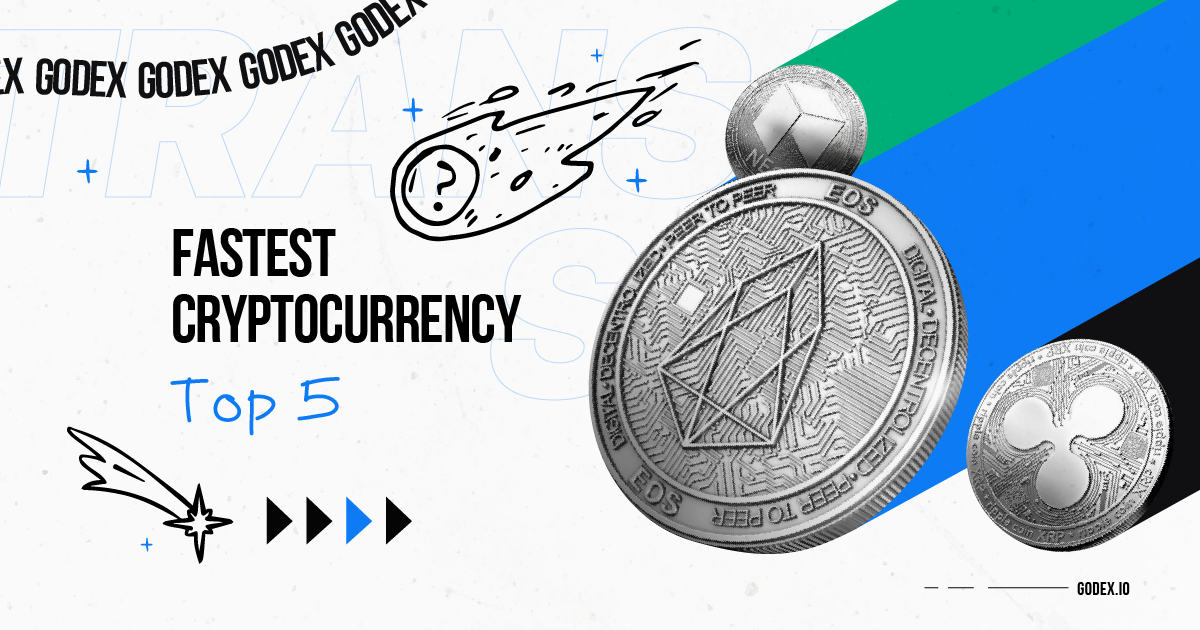 A couple of years ago, everyone had a friend who dreamed of getting rich on bitcoins or made plans to create a mining farm. Alas, most of these business stories ended before they even started. A lack of awareness of new technologies is one of the reasons. Blockchain is the latest technology, the interest in which has grown along with the popularity of cryptocurrencies. Today it is widely discussed not only in the world of finance. They are already trying to use blockchain for storing and processing personal data and identification, in marketing and computer games. In this article, we attempt to figure out what is the fastest blockchain and which is the fastest cryptocurrency.

As a simple explanation of the blockchain, you can imagine a notebook with notes, with its sheets as separate blocks. The rules for making new entries in the notebook are set so that without filling the previous page, it is impossible to write on the next one.

Each blockchain user has his own copy of the notebook, which he receives immediately after the first connection to the network. When someone wants to make a note in a notebook, he informs the other participants about it. Next, a check is performed, during which it is determined whether this “someone” has the right to write in a notebook. If the check is successful, a new entry is added to the notebook.

To prevent attackers from replacing or “tearing out” some pages with records, they are all numbered in order. This means that on all pages the date of filling is put down, as well as a link to the previous page is entered. The link is encrypted and composed in such a way that when the page is changed, it will immediately become visible.

For example, it will indicate how many times and which vowels are found on all previous sheets. It is enough to “paste” a new sheet of paper with incorrect entries, and the next check will reveal a discrepancy. After comparing the notebook with other copies on the web, the wrong page will be replaced.

Each page in the notebook is divided into 2 parts. One contains service information:

The second is used to store information.

What is cryptocurrency transaction speed and why is it important?

Transaction speed is a clear and obvious parameter that can be found in almost all comparisons of digital coins, but it is not a trivial task to measure it.

One way is to take data on the number of transactions for a certain period from the block explorer service and calculate the average value.

After Bitcoin, many new cryptocurrencies have tried to create their own blockchains, which are claimed to be faster and cheaper. Their primary goal has often been to defeat Visa centralized global payment system, which reaches 24,000 transactions per second (TPS) following IBM 2010 data.

Transaction confirmation times and scalability in general are of course important especially when it comes to the long-awaited mass adoption of crypto; however, they are not the only criteria that indicate the merits of a particular blockchain.

There are several factors that change in real time that have to be considered:

Keep in mind that your transaction fee will only affect the first confirmation, which is the only block where miners collect their fees. All subsequent confirmations are due to the fact that the transaction was already included in the previous block and not due to a commission.

To make a cryptocurrency speed comparison of the largest crypto coins it should be noted that there is no exact figure. Nevertheless, according to reviews and statistics, the rating of the “speed” of cryptocurrencies can be built in the following way:

The maximum system load is one of the important factors when evaluating digital coins. Today, Bitcoin and blockchain technologies have radically changed the paradigm of doing business. Calculations with crypto coins significantly save time and nerves. To pay a foreign partner for a product or service, you no longer need to pound the bank’s doorsteps for weeks, provide documents and hope that the bank will not block the payment. Crypto transactions are carried out almost instantly, do not require an intermediary, and therefore are gaining popularity. What’s the fastest crypto coin to buy? Below we will present a number of coins that support much more serious loads.

After the publication of the TOP-20 table of the fastest blockchains on Bitcointalk, it turned out that many traders need a separate cryptocurrency (or preferably several ones) for the fastest crypto exchange. Therefore, the support of the most trusted and fastest cryptocurrency trading platforms turned out to be a very important parameter. And Ripple (XRP), which can be found in the listings of a big number of large crypto-exchanges, multi currency wallets and exchange services, was ahead of everyone.

Ripple is known for the fastest cryptocurrency confirmation which takes about 3 seconds, and the claimed performance is 1,500 TPS. Banks and payment systems claim support for the platform, but the number of real implementations is still small.

Dash (formerly Darkcoin and XCoin) is a decentralized payment system in the form of a cryptocurrency based on an open blockchain that uses an anonymous transaction mechanism. It is the pioneer of the node and masternode system.

In the issues such as transaction speed and energy efficiency, DASH emissions differ from Bitcoin significantly. DASH transactions are much faster. A block on the Dash network is generated every 2.5 minutes, its size is 2MB, thus the transaction speed is up to 56 TPS, which is 8 times higher than on the Bitcoin network, where a 1MB block is generated every 10 minutes. At the same time, the speed of transactions in Dash will grow as the protocol is subject to constant improvements, and more than 60 developers are working on the fastest crypto transaction time.

Stellar (XLM) is a payment technology based on the Ripple protocol. However, Stellar is committed to working with developing markets and well-established financial institutions, not banks.

It has been reported that Stellar has different TPS. Therefore, according to one employee of the Light Year company, the Stellar blockchain can indeed process up to 1,000 TPS.

And as provided by the CEO of Barclays Africa Steven van Koller, testing of the Stellar prototype on Google cloud servers showed 10,000 TPS.

Its unlimited emission is an important point to keep in mind when considering this cryptocurrency. Stellar, in our opinion, is not suitable for investment, but due to the low price of the coin and the smallest transaction costs, it is great for quickly transferring small amounts between exchanges.

The platform offers some of the fastest cryptocurrency transactions, i.e. 4,000 TPS. Using NEM blockchain, you can conveniently convert different tokens into real currency. Cooperation is conducted with the largest company DigitalEconomyCorporation. The cryptocurrency has serious potential, it is the main competitor to Ripple. Introduced in 2016, it is especially popular in Japan. The team took a benchmark to develop the safest and most convenient way of bank transfers.

To ensure reliable operation based on the NEM blockchain, the Mijin network has been launched.

RaiBlocks is by far the fastest transaction cryptocurrency. Its blockchain is capable of handling up to 7,000 TPS. This is achieved through the use of a block-lattice architecture, when a blockchain is created for each account in the network. This technology allows you to add blocks to the chain almost instantly and without the need to check them by the entire network.

Litecoin is often overlooked by investors, traders and the media in vain, as this veteran coin has remained in the top ten in terms of capitalization for many years.

It takes an average of 2.5 minutes to create a new block on the Litecoin network, while on the Bitcoin blockchain it takes 10 minutes. Accordingly, transactions in LTC are processed 4 times faster, although most services require more than one confirmation (often about 10).

Litecoin is a time-tested coin that owes its popularity primarily to cheap transactions. While in the Ethereum and Bitcoin networks, any operation will cost more than $ 15, LTC can be transferred for as little as $ 0.05. Therefore, if you are planning to make transfers in cryptocurrency, Litecoin is an excellent choice.

Although these virtual currencies conduct transactions very quickly, blockchain technology is still new. Investors should keep this in mind. Almost a decade ago, Bitcoin took the blockchain to a new level of development, but companies still use the technology extremely limitedly, mainly testing in small projects. In the future, blockchain may change our world beyond recognition, but the transition to it is likely to take longer than expected. The advantage in the form of accelerated transactions is an important point because this is what crypto coin users often miss.

The challenges faced by the pioneers of the blockchain industry may be an obstacle to the evolution of the crypto industry, but will most likely be another factor that will help technology improve and reach new heights.