The Top 10 Facts Everyone Needs To Know About Bitcoin 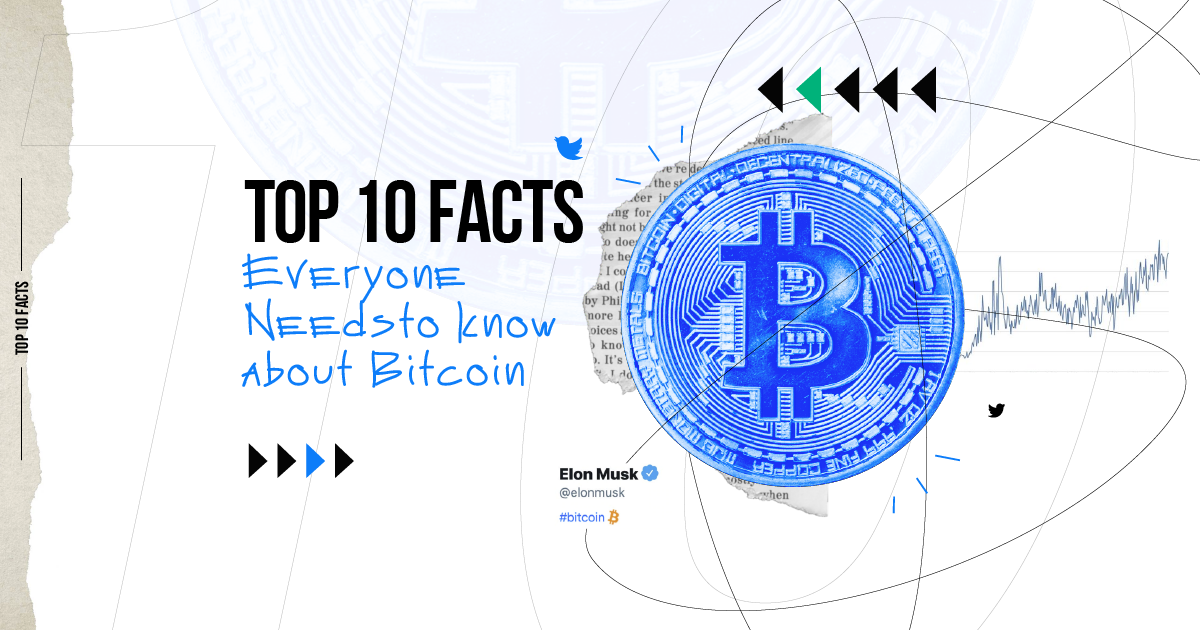 Even the most uninterested in digital assets people know something about this legendary cryptocurrency. Bitcoin cannot be cashed out because this currency does not physically exist as it is entirely based on cryptographic techniques. There are only special registries that keep track of how many bitcoins someone has and who and where transfers them. Registries are not stored in banks or payment systems, but in a decentralized manner: in blockchains on all computers that are occupied with bitcoins. This means that anyone can view all transactions with bitcoins in the entire history and it will be impossible to forge this data. Also, bitcoin is not controlled by the state or any private company.

At the same time, bitcoin owners can be absolutely calm about the safety of their assets and the reliability of transfers, since this currency cannot be stolen, and transactions undergo a serious security check.

Although there is probably no person left on earth who would not have heard of the first cryptocurrency, not all advanced crypto users are aware of the following curious facts related to Bitcoin.

The first purchase made with Bitcoin

What would you buy if you had, for example, 10,000 BTC? How about pizza? Because that’s exactly what Laszlo Hanyecz spent his bitcoins on. At that time, they were equal to only $ 41 and no one accepted cryptocurrency as payment for goods or services. But Laszlo wanted pizza and made the first deal, converting digital money into real physical and edible goods.

One can only imagine how much he could buy pizzas with these bitcoins today, which equal to $ 353,714,000 at the time of writing. Well, at least May 22 is named Bitcoin Pizza Day in honor of this event.

Who is the inventor of Bitcoin?

Let me know when you know the answer to this question. Satoshi Nakamoto introduced Bitcoin to the world in 2009, and his identity is still shrouded in mystery, as no one knows who he is. There are many versions, and sometimes one is more ridiculous than the other. What is known for sure is that his wallet holds 980,000 bitcoins, making him one of the richest (if not the richest one, since we do not know about his other funds) people on the planet.

Such secrecy of the Bitcoin creator does not inspire much confidence in his creation. Yet this does not prevent Bitcoin from being the most coveted currency in the eyes of crypto investors.

Bitcoins are limited in number

If you can print an infinite amount of hard currency (well, it is not allowed, but it is possible), then with cryptocurrency it will not work. Each bitcoin is unique and cannot be faked or copied. Moreover, the amount of bitcoins is capped at 21 million. There are currently 18,747,750.00 bitcoins in circulation and the rest is mineable.

Now, good news for those who do not have the funds to buy a whole bitcoin: you cannot afford to buy a whole cake, buy a piece! Bitcoin has its own “cents” named Satoshi, after the mysterious creator of Bitcoin. It is an indivisible unit that can be traded and equals one 0.00000001BTC or $ 0.0003542 at the moment of this writing.

Despite the fact that some countries, including Bangladesh, Vietnam, Bolivia and Thailand, have tried to ban bitcoin, it is impossible to do so. The reason for this attitude towards cryptocurrency is clear: the authorities do not approve of what is not subordinate to them, that is what is not under the security of regulators and tax collectors. However, you cannot prohibit what cannot be prohibited. After all, while there is access to the Internet, there is access to bitcoins. So, bitcoin owners don’t have to worry that one day their digital assets will become illegal.

Each bitcoin owner has a set of security keys: public and private. The public key is like an email address that you give to someone who wants to send you a letter, only in our case, these are bitcoins that are sent to the wallet address.

A private key is like a secret code from the safe where the money is. Whoever knows the private key owns the funds. The loss or destruction of these keys means only one thing – the loss of bitcoins. When we talk about losing bitcoins, we mean that no one will ever be able to use them again.

The things you can buy with Bitcoin

If earlier exchanging bitcoins for some physical product or service was a real problem, now it is easier to list what cannot be bought with bitcoins. Owners of the most popular cryptocurrency can buy almost everything for it, from coffee at Starbucks to a Tesla car. In addition, travel enthusiasts can purchase flights and book hotels using their BTC, and gamblers can place bets with them.

Due to its anonymity and tax-free nature, bitcoins are likely to soon replace the state currency, so that all purchases and services will be tailored for them.

The Most Valuable Hard Drive

Remember Bitcoin Pizza man? I have another story for you about the “lucky man” from Newport. Here’s what happened. One day James Howells spilled coffee on his laptop. It happens to everyone! But not everyone has 7,500 bitcoins on their laptop! What is James doing? He forgets that he has them, and when he remembers it, the hard drive from the laptop rests under a ton of garbage in the landfill. The thing is, when he bought these bitcoins, they were worth nothing. Now they would make him a millionaire. Now, everybody knows the price James paid for the mistake.

Never drink coffee over a laptop that stores bitcoins, and don’t forget the purchased cryptocurrency, even if it costs nothing now!

There are many interesting facts about mining bitcoin, but we will talk about the most important. The most common search query is: “What do I need to start mining bitcoins?” And I would answer in one word: “Power”, or even in four words: “A lot of power.” The bitcoin mining process is expensive; you pay a lot of money, time and electricity, a lot of electricity. Bitcoin mining requires servers, powerful servers capable of processing data quickly since your reward depends on it.

Bitcoin currently consumes about 110 terawatt-hours per year (according to CCAF). To understand a lot or a little: about the same annual energy consumption in countries such as Sweden and Malaysia.

So be prepared to pay a tidy sum for electricity if you decide to mine bitcoins.

A Bitcoin transaction is irreversible

Another interesting feature of Bitcoin relates to transaction facts. Even many experienced cryptocurrency users may recall cases when they did not have time to thoroughly check all the data on their transaction and accidentally sent funds to the wrong recipient or sent the wrong amount. Sadly, cryptocurrency transactions in the Bitcoin, Ethereum and Bitcoin Cash networks are irreversible, which means that they can’t be cancelled or changed. Knowing this, it is very important, before you click the “Send” button, to make sure that all the data for your transaction is correct.

These were the most interesting facts about bitcoin, and there are still a lot of fascinating things in the world of cryptocurrencies ahead of us!