Godex Blog / Crypto Talks / How long does it take to mine 1 Bitcoin?

How long does it take to mine 1 Bitcoin? 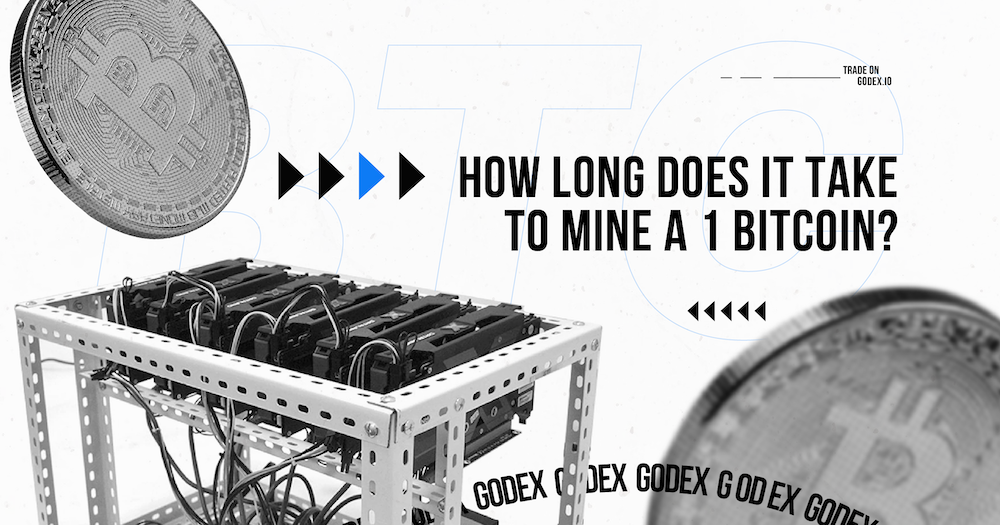 Nowadays, a single Bitcoin costs up to $38 000. This might seem a great reason to dash and go for mining immediately. But the world is not only rose here. You might wonder, “ How long does it take to mine 1 bitcoin?” Sometimes, a year or more is taken to dig out a coin. The time spent on it has also an impact on returns on investment.

The whole mining process implies several aspects. You’ll need to figure out mining time, which might turn out endless, equipment, going solo or getting into a mining pool, and difficulty score. If the game still attracts you, then keep on reading. We’re going to cover all key details one needs to be aware of when about to mine.

What is a Bitcoin?

Before figuring out how long to mine 1 bitcoin, let’s outline what bitcoin is, essentially for newbies in the industry. BTC is a pioneer digital token issued in 2009. The holders can purchase services and products with it. At present, retailers, service providers like airlines, establishments use bitcoins for payments.

Bitcoins are not controlled by the government, meaning it does not maintain their present-day worth. Thus, its devaluation rate and the number of coins released are not dictated by anyone. Bitcoins come out by means of the process – mining – and are quantified on a sort of electronic ledger – blockchain. The latter suggests a technology that enables transferring digital money between e-wallets of different people or entities.

What does this process mean?

Bitcoin mining happens when novel bitcoins are joining the whole circulation that runs on the blockchain ledger. It is also the method to approve operations within the network and an efficient way to maintain and develop the blockchain in general.

Additionally, this is where a powerful rig is required. It has to solve tough mathematical exercises. Had the first one delivered the solution to it, the rig’s owner gets a bonus or perk with the next block of bitcoins. Then, the routine starts all over again. So, how long does it take to mine 1 bitcoin?

Crypto mining is quite cumbersome, expensive and might pay off occasionally. However, it is super attractive for investors because they are compensated with crypto tokens. Some “cryptopreneurs” deem the mining money from heaven. Besides, if technology adds to it, then why not?

What does it take to succeed in this?

Below you’ll find the most essential aspects you should be aware of before hitting the road in this domain. Here’s a shortlist:

They need to be that powerful to complete complex cryptographic tasks. Simply a few years ago central processing units used to be mainstream. Nowadays, new kinds of devices outperform them. The whole thing needs tons of energy, meaning the device needs to be energy-efficient and strong to operate to the fullest and continuously.

Solo mining might be like a gamble, and yet it could be profitable too. Solo players do not have to pay for any entry or participation, nor distribution in a group. The general mining outcomes might seem a little bigger than collabing with others, especially for those conducting a significant mining operation.

When surveying mining pools to become a part of, it’s crucial to think about two core facts – reputation in the crypto realm and group hash rate. The latter suggests how much power is required to mine BTC at every particular moment. At present, anyone has access to solid mining pools that regulate a huge share of the network’s hash rate.

Before getting into a mining pool, verify if it’s trustworthy. Some are simply scams. Consider well-known ones even if their entry fees are higher than average ones. They provide more advanced hashing resources and block bonuses for participants. Besides, their infrastructure is robust enough to resist cyber-attacks.

But if your rig is super powerful and you find electricity costs affordable, you can boldly go solo. How long does it take to mine 1 bitcoin when going solo? Considering the current difficulty rate (see it below), the whopping five years could be spent on getting 1 BTC. Herewith, the weak point of group mining is to distribute payouts with other fellows in the pool.

It’s the third crucial aspect to take into consideration. It defines how much effort is necessary to get profits. The term suggests maintaining the stability of releasing blocks’ rate at a rate of one block per ten minutes. While cryptopreneurs continue to enter the system, approving transactions takes less time. Therefore, the community makes it difficult to hinder block generation.

As it was previously stated, with a current difficulty rate, a solo player will spend up to five years to get one token. It is an optimal rate for miners. What’s more so it is for those who exploit the most powerful mining equipment.

Нow Long It Takes to mine 1 Bitcoin?

Usually, 10 minutes are enough to spot each block. Every block makes up a 6.25 BTC payoff for the participant who pinpointed it successfully. But it’s crucial to remember that within the network the competition is savage in this ‘block revealing race”.

How long to mine 1 bitcoin for one single miner? To be honest, it is super difficult to spot a block. A solo miner can actually identify by themselves. But as there is a crowd of Bitcoin miners engaged in the process, individual discovery is pretty unfeasible.

The majority of Bitcoin miners collaborate in a mining pool, having all a common hash rate to increase the odds of finding a block. Once the member identifies it, the perk is distributed fairly across the group. Thus, a miner that brings 1% of the pool hash rate to the table will land 1% of the block bonuses allocated to them.

To remind, the mining difficulty is the dynamic value that defines the Bitcoin block mining success. It updates every 2,016 blocks, considering the present-day amount of mining power inside the whole network. When every 10,000 blocks are mined, the block compensation divides in two (the phenomenon recurs every four years). Due to this, the actual Bitcoin block reward constitutes 6.25 Bitcoins.

So, how long does it take to mine a bitcoin? To get the answer to this, think of the core factors defining how much time a cryptopreneur will need to land 1 BTC:

How Much Bitcoin Can I mine in a Day?

As you probably noticed, there’s no exact answer to that. To comprehend how long it takes for your equipment to get one token as a reward, you can turn to the following equation, factoring in its hash rate: 1 / (hash rate (in PH/s)) * 0.0066. As a result, you’re supposed to get the number of days required to land one BTC as bonuses under actual difficulty conditions.

How Profitable Is It to Mine for Bitcoins?

Bitcoin business is as profitable as one can afford powerful mining gear or contracts. First and foremost, this token is a deflationary asset, meaning its supply is pretty limited. Also, doing solo or being a part of a pool defines success in this domain. For solo miners, chances are almost zero to bring home huge moneybags.

Besides, the halving process cuts block rewards in half. It happens every four years, or when every 10,000 bitcoins are mined. To increase chances for positive outcomes, it is recommended to get into a mining pool. They assure smaller but regular payouts and decrease risks existing in Bitcoin mining. Solo mining is riskier and leaves fewer odds for profits due to high competition.

If you wonder, ‘How long does it take to mine a bitcoin?”, you’re probably about to get into the game seriously. Consider what makes sense for you the most – being a sole miner or working in the group. Also, calculate how much you can earn with the gear you possess and check out the current difficulty rate. Finally, think about other crypto mining and trading as a business to gain profits faster than Bitcoin mining promises.