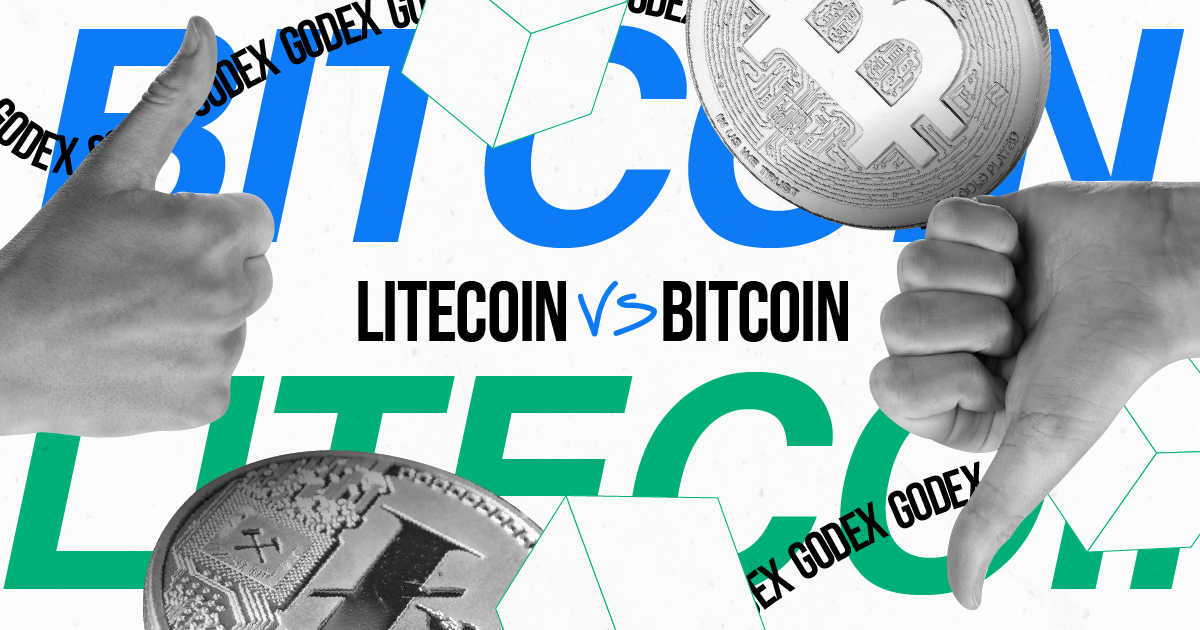 A Short History of Litecoin and Bitcoin

The subject of comparing Litecoin with Bitcoin did not arise from scratch. After all, the emergence of Litecoin is inextricably linked with the existence of the world’s first cryptocurrency. Let’s take a quick look at how it all began, and how the fates and nature of the two coins intertwined and diverged.

Of course, it all started with bitcoin, or rather with the mysterious Satoshi Nakamoto, who in 2008 introduced the world to a completely new electronic payment system, the principles of which are based on mathematical calculations. Regular money has bored society, and digital coins have sparkled with a number of advantages, such as cryptographic protection, transparency of transactions, anonymity, and independence from government regulators.

The first bitcoin transfer was carried out by Satoshi himself, and the solvency of the cryptocurrency was proved by ordering two pizzas, which were bought for 10,000 bitcoins.

In October 2010, a vulnerability was discovered in the bitcoin code. As a result, one user generated 184 billion bitcoins at a time. The problem was fixed in 8 hours.

Due to the lack of material support, the bitcoin rate jumped and in February 2011 for the first time equaled the dollar. In the same year, Charlie Lee, who worked at Google, released the Litecoin protocol, implementing it as an open source client. The Litecoin protocol was created in response to the obvious shortcomings of bitcoin, and although LTC has not been able to catch up with its older coin brother, it is consistently at the top of the cryptocurrency list.

Is Litecoin a Fork of Bitcoin?

A Bitcoin fork is the creation of a new cryptocurrency based on the Bitcoin code. At the same time, the blockchain is launched from scratch by a separate group of developers or a company and, of course, no voting is carried out.

The main reason for creating forks is the desire to create a coin better than Bitcoin. Therefore, often new technologies are introduced into the code of the main cryptocurrency or existing ones are replaced. Most often, the following parameters are changed:

Since the bitcoin code is open, everyone can use it to create a new cryptocurrency. There are hundreds of projects created in this way, but only a few managed to get out of this huge “crowd”.

The first bitcoin fork was Namecoin (NMC), followed by Litecoin (LTN). However, unlike Namecoin, some key technologies have been changed in it. Let’s take a look at them.

Litecoin creator Charlie Lee made changes to the code that made it possible to conduct transactions faster, cheaper and safer compared to Bitcoin.

The developers have slightly changed and finalized the bitcoin source code:

Changed the encryption algorithm from SHA-256 to Scrypt, due to which at first Litecoin was “ASIC-resistant” (previously miners had perfectly mined coins using central processors and video cards);

The block generation time has been reduced to 2.5 minutes, while the network is capable of processing 56 transactions per second.

Also in 2017, the Lightning Network protocol was integrated, which made transactions very cheap. Later, the SegWit technology was added, as well as atomic swaps with three cryptocurrencies at once (Decred, Vertcoin and Bitcoin).

Consensus in the Litecoin network, like Bitcoin, is achieved through the Proof-of-Work algorithm, that is, miners solve a complex mathematical problem for generating blocks and receive a reward for this, which simultaneously serves as the issue of new coins.

Using Scrypt allows Litecoin to interact faster with RAM. This speeds up mining significantly. Each block is processed on average in 2.5 minutes, while in Bitcoin it takes 4 times longer. This allows for faster digital currency generation.

The original purpose of using Scrypt was to allow miners to mine both Bitcoin and Litecoin at the same time. The choice of using the algorithm partly consisted in not providing significant advantages to pools of miners with GPU, FPGA and ASIC over CPU miners.

In fact, it turned out that FPGA and ASIC devices for Litecoin mining with the original algorithm are not only more complicated, but also more expensive to manufacture than similar devices for Bitcoin mining, which uses SHA-256.

On the other hand, thanks to the Scrypt algorithm, the system can interact with memory more efficiently. The block processing speed here is four times higher than in Bitcoin, which significantly speeds up mining, and at the same time the appearance of new coins in the system.

At the moment, the blockchain generation reward on the Litecoin network is 12.5 LTC, which is about $1,515. Whereas miners on the Bitcoin network get 6.25 BTC (about $198,500) for every valid block mined.

The decrease in the Litecoin mining reward (halving) occurs every 840,000 blocks, which is half as often as in the case of Bitcoins. Blocks are created every 2.5 minutes, which is four times faster than on the Bitcoin network.

Litecoin is unlikely to outperform Bitcoin as an investment vehicle, even if LTC is technically better: BTC is simply better known and dominant in the market. However, if digital currencies become more and more popular in everyday transactions, then litecoin has a very promising future. The creator of altcoin wanted people to buy goods with Litecoins every day. Give humanity another way to pay. And if Bitcoin does not improve its technologies, this may well happen. No one will wait more than 10 minutes to buy coffee and a croissant. So, perhaps, Litecoin will become a full-fledged replacement, or rather an alternative, to fiat currency. That is, both currencies are interesting in their own way, and, most likely, deserve investment.

Anyway, always remember the advice of prudent investors: whichever cryptocurrency you would choose to invest in, do not invest more than you can afford to lose.

LTC and BTC: Store of Value

Litecoin is more affordable and the transaction speed is significantly higher than that of Bitcoin. Therefore, as already mentioned above, there is a possibility that soon we will be able to pay with digital silver in shops and cafes, just as we do now in dollars and euros.

Thus, it is worth concluding that Litecoin is a more practical and scalable medium of exchange, while Bitcoin has become a store of value.

Bitcoin and Litecoin are both digital or virtual money that have different values. In an interview, Lee once explained why he calls Litecoin “digital silver” to Bitcoin’s “digital gold”. As we know, gold and silver have been used as currencies, and since gold is much more expensive than silver, it is better suited for high-value items. Gold is the most demanded commodity for trading in large values ​​(for example, buying real estate), and silver is the most demanded commodity for small transactions (buying clothes or food stuff).

Thus, each cryptocurrency occupies its own niche and can be useful for certain purposes. Therefore, if possible, it is good to have both coins in your wallet. Moreover, the most popular payment systems, such as PayPal, allowed the use of both Bitcoin and Litecoin to pay for goods.

Both Bitcoin and its smaller brother are constantly evolving, not independently, of course, but a group of enlightened minds are working on the development and improvement of technologies. Not uncommonly the breakthrough in the cryptocurrency industry happens thanks to the support of influential partners. For instance, this year Tesla has announced it invested $1.5 billion in Bitcoin.

Also, due to the fact that it’s free software with an open code, which means that every developer can contribute to the project.

At the beginning of June last year, Bitcoin developers released an updated version of the main software client Bitcoin Core 0.20.0, which received experimental features to protect against large-scale attacks that could split the Bitcoin network.

Litecoin Core 0.18.1 was released around the same time, with over 100 changes to improve performance and fix bugs. Changes include improvements in block and transaction processing, networking code and P2P protocol, graphical user interface, wallet and build system, as well as a typical set of new RPCs and many others.

The Litecoin development team has also begun work on Litecoin Core 20.0, which Charlie Lee says will keep the project on par with the latest Bitcoin Core.

Summary: which cryptocoin is better?

I think this question is offensive. In some ways, any currency is superior to others. In addition, it all depends on individual preferences, goals and capabilities. Where the latter, in my opinion, dominates the choice of cryptocurrency for investment. Given the different value of the coin brothers, it is clear that they should be used differently. Bitcoin, having the greatest value and being the giant in the world of cryptocurrencies, can be used as a store of value. Litecoin, which offers excellent transaction speed and low fees, can be used in daily purchases.

The advantages of Litecoin include the relatively low price of the currency compared to the main coin of the crypto world. This means that the threshold for entering the cryptocurrency market for a Litecoin buyer is much lower than for a potential investor who wants to buy Bitcoin.

At the same time, it is important to understand that Litecoin in most cases behaves in the same way as other cryptocurrencies, repeating the market movements of the Bitcoin rate. Moreover, the level of drawdown in currencies competing with Bitcoin is sometimes much higher, which cannot be said about profit.

In short, the following table will help you see all the similarities and differences between Bitcoin and Litecoin:

Therefore, if you are still thinking about what to buy Bitcoin or Litecoin. Alternatively, if you can afford to buy Bitcoins, why not buy Litecoins as well for more practical purposes and everyday spending? However, keep in mind that any investment is a risk.

The value of digital money is volatile, and it changes almost every moment. Due to its advantages, many predict Litecoin to be the first in the list of top cryptocurrencies, displacing Bitcoin. However, just as silver can never become gold, Litecoin is unlikely to ever be able to replace Bitcoin. And there is no need for this because they complement each other perfectly.